You are here: Home / Other Topics / Farmstead / Farm Volunteer Surprises!

What an absolutely beautiful day we had Friday!  We spent most of the day in the yard working!  And we are so thankful to have the warm day to do it!  This time of year, it is very common to get in the greenhouse and find a volunteer or two growing.  But this year, we have a whole new level of farm volunteer!  Look at what we found:  Ten Potato plants and Carrot Volunteers!!!  I didn’t even know Carrots would return if not picked!  (Ha ha ha…. Live and Learn, right?)!  Anyway, I thought I would share some pictures of what is going on around here.  Spring is when everything on the farm is starting to kick back into gear, including us… I’ve got a few winter pounds to lose myself due to lack of activity!!!  But, all of sudden, in the matter of two days, we have green plants everywhere, our pear trees are blooming like crazy and already we feel a sense of urgency…  as if we are behind in a span of less than 48 hours 🙂

Anyway, get back to the volunteers… this year, we got an even bigger surprise volunteer… See the pictures below: 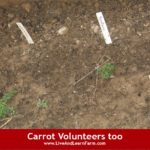 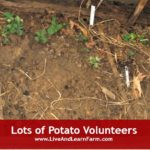 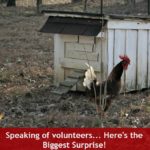 Meet Cooter Brown (my hubby named him)! A friend of ours called to let us know our rooster was out. When we got outside, our Rooster (Rocky) was safely in the pen. But the next day, we figured out it wasn’t OUR rooster that was out, but a new rooster visiting. He is young, he doesn’t even have official spurs yet). Looks like a Rhode Island Red mix. Anybody know? Look at those white tail feathers! Anyway, him and Rocky didn’t get along when they were in the same pen, so we moved Cooter to the other pen. This morning, Cooter was gone… but the gate was closed, so we now know he can fly. This afternoon, he’s been spotted back inside the pen snacking on crumble. We’ll see if we have a new addition to the flock, or if he is just a traveler passing through. Either way, this has been a fun adventure trying to catch and encourage him to stay!

I will post more pictures later with more details!  Until next time….