You are here: Home / HomeSchool / Bible / 5 Scriptural Facts All Children Should Know About Passover 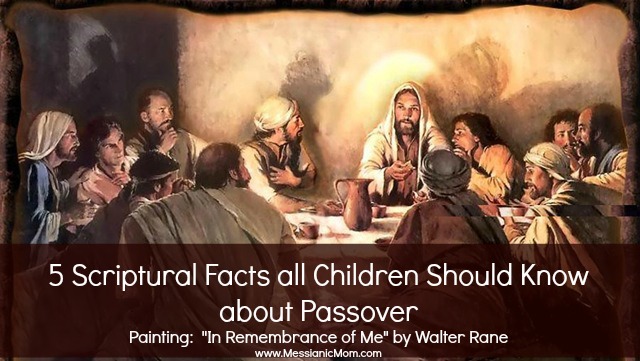 Our family is Messianic and therefore we observe the Lord’s Feasts described in the Bible. Understanding the Jewishness of our Messiah Jesus (His Hebrew name is: Yeshua ) helps us understand our faith and the depth and richness of Scripture more fully. Remember the First Century Believers did not have the New Testament to read, they used the “Old Testament” to test what Yeshua was teaching and to determine if He was their prophesied Messiah.

Passover / Pesach is so much more than just a celebration, it is a remembrance of redemption that is taught and retaught every year during the Passover Seder. A Seder is a meal that marks the beginning of Passover. This Seder teaching is calling people to their identity as the People of God. By using all of our senses, the Passover Seder not only tells the story of God’s grace that is demonstrated throughout history, but also calls us to experience and share in the story, our story, our history. Passover is so much more than a sermon, it is commanded for us to remember. So, let’s teach our children about our Messiah, Jesus, and Passover and fulfill this command. The five scriptural facts all children should know about Passover:

1.  Jesus kept the Passover, from the time of His youth. Luke records:

His parents went to Jerusalem every year at the Feast of the Passover. And when He was twelve years old, they went up to Jerusalem according to the custom of the feast (Luke 2:41-42)

2.  Jesus continued to keep Passover His entire life., once a year as commanded in Exodus 13:10. It was observed on the fourteenth day of the month of the first month (called Abib in Deuteronomy 16:1 or Nisan in Esther 3:7):

On the fourteenth day of the first month at twilight is the LORD’s Passover (Leviticus 23:5).

And Jesus had his disciples also keep it:

7 Then came the Day of Unleavened Bread, when the Passover must be killed. 8 And He sent Peter and John, saying, “Go and prepare the Passover for us, that we may eat.” 9 So they said to Him, “Where do You want us to prepare?” 10 And He said to them, “Behold, when you have entered the city, a man will meet you carrying a pitcher of water; follow him into the house which he enters. 11 Then you shall say to the master of the house, ‘The Teacher says to you, “Where is the guest room where I may eat the Passover with My disciples?”‘ 12 Then he will show you a large, furnished upper room; there make ready.” 13 So they went and found it just as He had said to them, and they prepared the Passover. (Luke 22:7-13).

3.  Passover commemorates God’s redemption of the Hebrews from slavery in Egypt (and spiritually redemption of the Believers from the world) and the creation of the Israelite people. Passover is actually three feasts Passover (Pesach), The Feast of Unleavened Bread and the Feast of Firstfruits. Every single event in Jesus’ end days matches up with these three feasts of Passover. He was crucified as our Passover lamb, He was buried on Unleavened Bread and He rose on the Feast of Firstfruits.

4.  At a Passover Seder there are four cups of wine. The First cup is the “Cup of Sanctification” (I will bring you out of Egypt). The second cup is the “Cup of Deliverance” (I will deliver you from Egyptian Slavery). The third cup is the “cup of Redemption” (I will redeem you with My power). The fourth cup is the “Cup of Restoration” (I will take you as My People). Since Yeshua was keeping a Passover Seder (Luke 22:15-16) with His Apostles, he drank of these cups. But the last cup, the Cup of Restoration, He did not drink. He promised to do so with them in the coming Kingdom! Matthew 26:29. The fact that He took the bread and the cup after supper identifies the bread as the afikoman and the cup to be the cup of redemption (based on the order of the Seder.)

5.  The bread pictured at the last supper is usually of this beautiful full loaf of bread, but that is not what really would have been on the table. The bread of the Last Supper is unleavened bread (Matzah).  Here is another beautiful aspect of the Seder that we completely miss when we separate our Messiah from His Jewishness… there are three pieces of Matzah placed in a bag. The middle matzah is pulled out and broken in two with half of it wrapped in white linen and hidden. The children search for the middle matzah (known as the Afikomen) and the one that finds it brings it back to the father of the house to be redeemed for a price. The other half of the bread is passed around and eaten.

So you see, there is so richness that can be learned by studying our Messiah, Jesus, from a Jewish perspective. I hope you will continue to study and learn about Passover. Remember, we are called to be Bereans, to test everything we hear and read against His Word, the Bible!

Credits: Artwork is by Walter Rane. A print of his painting can be purchased from here.